Bunnies in a box 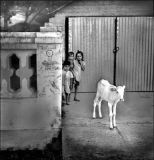 A small selection. Looking at these now, I can see that with the exception of the dog enjoying the seaside, all these animals have in common the fact that one way or another they are vulnerable. Particularly in Barcelos in the Minho where there is a huge open-air rural market where bunnies (for your lunch) are displayed in boxes, chickens in crates, and cabbages on carpets.

At Monte Clerigo, on the Atlantic coast of Portugal, I saw this dog racing through the shallows.

In Barcelos I saw bunnies (Bunnies in a Box) in the gigantic open air farmers market held on Thursdays (the Feira de Barcelos).

The Hat is from a series on Fourques, in the Camargue, where young people practice Camargue bull-fighting (la course Camarguaise) on cows rather than on bulls. The Camargue bulls are in fact neither injured nor killed and are revered. Statues of famous bulls can be found in local villages, and the great fighting bulls are buried in the marshes.

Self portrait with Dog. The interest here was in the rather sinister-looking poodle hairdresser (the white coat) and the small victim under threat from a hairdryer. A bit of serendipity here too in that, unnoticed by me, my late husband is in the photograph - and a bit of Teddy's tail! All of us together.